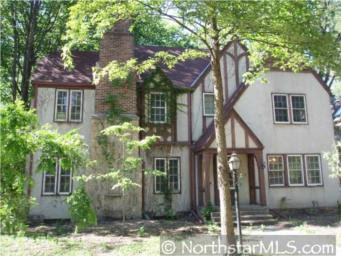 Extreme Makeover – Minneapolis Edition
In its hey day, this 1930 Tudor near Minneapolis’ Cedar Lake was a masterpiece: custom tile everywhere, lath-and-plaster construction, hand-carved crown moldings, high-end masonry, walnut and cherry wood throughout. Not to mention a grand staircase, and a surprisingly modern floor plan.
However, the owners hadn’t been able to keep up the property. In fact, years of neglect had left it with major damage and a long list of deferred repairs.
Given its location and large, .33 acre lot, it could easily have been torn down and replaced with an over-sized, out-of-character McMansion. But the owners, who’d grown up in the house, had a strong emotional investment in it, and wanted to see it bought by an owner-occupant who would rehab it.
After two weeks on the market, it sold for $405,000 last August.
The new owner, a contractor and his wife, began work the next day, and have had workers on the property 12 hours a day, seven days a week ever since.
The couple (and their new baby) are just now making the finishing touches on an amazingly restored and updated home that features, where the garage used to be, a brand new sunken Living Room with over-sized windows and French doors; an opened-up, modern new Kitchen; $50,000 of new, energy-efficient windows; gloriously restored hardwood floors, and many, many other high-end improvements. As they say, “the best of old and new.”
The former owners are thrilled; the new owners are thrilled; and the neighbors are thrilled (especially the one two doors down, who was also the Realtor who handled the sale: me!).
0Shares