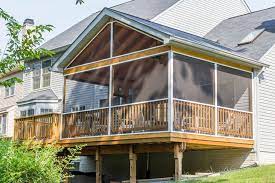 [Note to Readers: The views expressed here are solely those of Ross Kaplan, and do not represent Edina Realty, Berkshire Hathaway, or any other entity referenced. If you need legal advice, please consult an attorney.].

Quick! Which kinds of porches are included in a home’s finished square feet?

If Realtors routinely confuse the various types of porches . . . I don’t know what chance a layman has.

Perhaps that’s why, as a public service for Twin Cities Realtors, the local MLS helpfully describes the differences — and critically, addresses when to include an enclosed porch in a home’s finished square feet.

According to the Northstar MLS’s “Rules Roundup,” here are the distinctions:

“A 4-season porch is a room that functions as an interior room, but allows you to take in the views of the outdoors year-round. It has permanent heat and is included in the finished square footage of the home.”

“A 3-season porch has windows with integrated screen systems and can be used for long periods throughout the year. They can shield you from outdoor elements such as rain, wind, sun and insects, but 3-season porches are not heated. Therefore, it is not a part of finished square footage, but is considered an enclosed space.”

“Screened porches are a covered porch that has screened openings instead of windows. A screened porch may be less sheltered from the outdoor elements, but still offers protection from the sun and bothersome insects in the summer. Screen porches should not be included in the finished square footage.”

With that as prelude, here’s a practice pointer (my own, vs. MLS’s):

When in doubt, under bill vs. over bill.

That is, better to call it a 3-season porch than a 4-season, and safer to exclude the porch from finished square feet than to include it.

P.S.: Given how conspicuous a porch (of any type) is, it’s arguable whether — even if a Seller misstated its attributes — a Buyer would be entitled to rely on the Seller’s misrepresentation(s).

That’s especially after viewing the home multiple times (likely before making an offer), then subsequently inspecting it once there’s a signed Purchase Agreement.

**Note what’s missing from the possible choices: a “2-Season Porch.”

That’s because there’s no such thing.