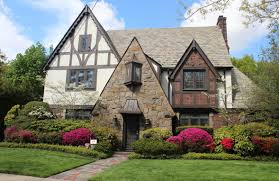 Translation: even if they’re in magnificent condition . . . they’re old.

Such Tudors often have formal (vs. open concept) floor plans typical of that era, and — unless their original hot water heat system (boiler) has been converted to forced air — either may not have central air conditioning at all, or may use a system of “mini-split” a/c units that don’t require installing new ductwork.

Finally, Tudors often have some other features (like stucco exteriors, steeply pitched roofs and gables, dark(er) interiors, and older windows) that are turn-off’s for at least some Buyers.

Ahh, but to Tudor fans (I’m one), those are mere quibbles compared to the genre’s myriad charms.

And while it’s purely anecdotal, I can’t recall ever seeing a poorly-built Tudor.

Bottom line: for homeowners who want a sturdy, timeless home with tons of character, Tudors are a terrific choice.

Just don’t expect to find them in the ‘burbs (with the exception of Edina’s Country Club and Morningside neighborhoods locally).