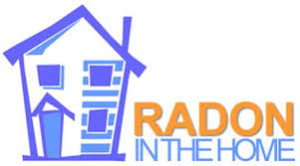 Elevated Radon . . . at Least till This Weekend’s Warm-up 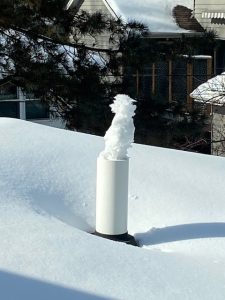 Unfortunately, the line “It was so cold in the Twin Cities this week that . . . isn’t the set-up to a joke.

Rather, it refers to the extreme cold — minus 25° below(!) last night — that caused at least some area home exhaust vents to freeze over, bottling up whatever was supposed to be discharged.

In the case of radon remediation systems, that would be elevated radon, typically most concentrated in the basement.

That risk is lessened when the radon system includes a fan or blower, because moving air is less likely to freeze (think, “lakes vs. rivers”). 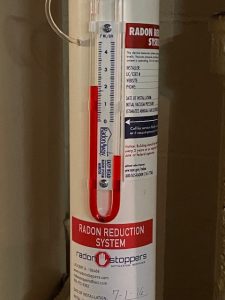 However, when the radon is passively vented (no fan) and the temperature is cold enough . . . . Voila! Instant ice plug (photo, above left).

The confirmation is the system’s radon display.

When radon is being successfully vented, the display resembles a backwards “J” (photo, right).

By contrast, when the vent is blocked, it looks like a “U” (photo, below left). 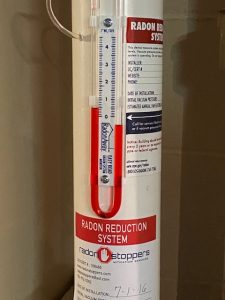 Given the forecasted warm-up this weekend, the problem for any affected homeowners is likely to disappear on its own.

However, home buyers doing their inspections now confronting this issue seemingly have three choices: 1) unblock the vent; 2) wait for the ice to melt; or 3) rely on the Seller documenting acceptably low radon readings (in Minnesota, below 4.0 Picoliters per million parts, or pCi/l)) when the temperature isn’t insanely cold . . .