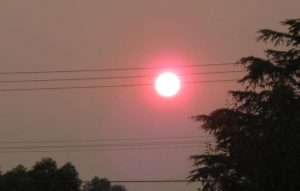 Minnesotans who have relatives on the East or West Coast (I have both) know the drill: whenever there’s a tornado (or blizzard) somewhere in the Midwest, we invariably get a worried call.

“I just was just checking to make sure you were OK,” they’ll say. “The storms there looked terrible!”

Whereupon I’ll explain that the bad weather was literally 400 miles away in southwestern Iowa (or some such) — but thank them for their concern, just the same.

So, it’s a bit of a shock to hear everyone I know on the West Coast — literally from Seattle to San Diego and multiple points in between — report that their air quality is harrowing now.

Of course, potential respiratory problems are the least of it: thousands of people in the path of the fires have lost their homes, and dozens their lives.

Meanwhile, tens of thousands have had to flee their communities, not knowing what they’ll return to (if anything).

Here in the Twin Cities, notwithstanding the pronounced haze, the Air Quality Index (“AQI”) is a still-good 44 (Portland tripped a toxic 400 last weekend), and the air doesn’t smell smoky.

I assume that that’s because the smoke is higher up in the atmosphere, leaving relatively healthier air at ground level.

If you’re not alarmed about climate change now, you’re not paying attention . . .