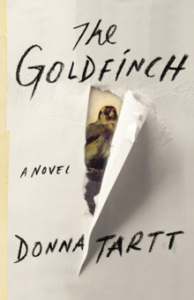 “Well, it’s not as if we’re running a hospital for sick children down here.”

–James “Hobie” Hobart in “The Goldfinch.”

Ahhh, but repair — spiritual repair — is exactly what is being practiced by the exceptionally kind, decent supporting character named “Hobie” in Donna Tartt’s sprawling “The Goldfinch.”

It’s just that Hobie ministers to only two people: Theodore “Theo” Decker, the story’s protagonist, and “Pippa” — both exceptionally bright, self-aware 13 years old’s who are scarred (and bonded) by a shared, tragic experience.

In fact, spiritual repair is just Hobie’s sideline: he invests the rest of his energy on restoring a literal Noah’s ark of injured, mistreated, or simply neglected fine furniture (don’t call them “antiques”) spanning three centuries and a host of countries.

Near the end of the book, Theo finally understands the symbolism of an especially prized, ensemble piece in Hobie’s collection, that distills his purpose in life:

“From my chair I had a clear of of Hobie’s Noah’s ark, paired elephants, zebras, carven beasts, marching two by two, clear down to tiny hen and rooster and the bunnies and mice bringing up the rear. And the memory was located there, beyond words, a coded message from that first afternoon: rain streaming down the skylights, the homely file of creatures lined on the kitchen counter waiting to be saved. Noah: the great conservator, the great caretaker.”

Of course, the “matched pair” that looms largest in The Goldfinch, whom Hobie’s considerable talents help save, is  . . . Theo and Pippa.

P.S.: Nothing against Jeffrey Wright’s acting skills, but he lacks one vital — one could argue, indispensable — attribute needed to convincingly inhabit the role of “Hobie” in the soon-to-be released movie:  exceptional height (and a certain manner and bearing that go with).

I had envisioned someone like a late middle-aged Edward Herrman or John Lithgow in the role.