“F. Ross Johnson is mainly remembered for the fleet of corporate jets that ferried him to celebrity golf events and other luxurious perks he awarded himself as CEO of RJR Nabisco Inc. . . . Yet the Canadian-born executive may have done some good for corporate America while having a ball on the RJR tab.”

–“Ross Johnson’s Legacy Goes Beyond a Reputation for Excess”; The Wall Street Journal (1/7/2016).

Crediting former RJR CEO F. Ross Johnson with improved corporate governance is like saying we have the 9/11 hijackers to thank for better airline security, or Richard Nixon 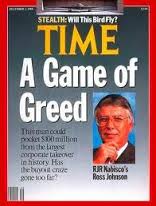 In each case, those effects were a reaction to egregious behavior, not something brought about by the principals themselves.

In Johnson’s case, unfortunately, the assertion also has the dubious distinction of being colossally wrong:  CEO compensation and perks at the nation’s biggest companies — now approaching a dizzying $20 million a year — are up more than five-fold since Johnson’s day, and more out of control than ever.

P.S.: Johnson and I share a first name and a birthday . . . and absolutely nothing else.

**In the fictional “Portage to San Cristobal,” Adolph Hitler — on trial in the Amazonian jungle by his Mossad captors — argues that the Jewish people owe him a debt of gratitude for making possible the state of Israel.