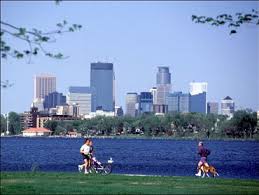 If Minneapolis’ Lake Calhoun had an equivalent to “Denali” — a long-established Native American Indian name used by locals — I’d be all for it.

But, as a (mostly) life-long Minnesotan, I’m not aware of any such alternative (sorry, “Bde Maka Ska,” the Dakota name for “White Earth Lake,” doesn’t qualify).

Meanwhile, unlike Alaska’s Mount McKinley, there’s no group (like the state of Ohio) that would vehemently protest a change from “Lake Calhoun”:  it’s hard to imagine a local constituency in liberal Minneapolis dedicated to the legacy of a slave-owning Secessionist.

Which leads to these two conclusions:  1) the political timing’s right to make a change; and 2) the field for a new name is wide open.

In that spirit, here are ten better choices, and the case for each:

10. “Lake Humphrey”:  the state’s most famous politician and near President (lost by a whisker to Richard Nixon, in 1968); the original “Happy Warrior.”  Alternative:  “Lake Mondale,” for Minnesota’s other Vice President and 1984 Democratic Presidential nominee, Walter Mondale.

7. “Lake Borlaug”:  not the most famous Minnesotan, but arguably the most important:  University of Minnesota scientist Norman Borlaug, who came up with a new strain of disease-resistant wheat that is credited with saving as many as one billion(!) lives.   Such a choice would highlight two of the state’s signature contributions:  agriculture and technology.  Key argument against:  was Borlaug first and foremost a Minnesota? (he was from Iowa, and did much of his pioneering work in other parts of the country as well as Mexico).

6. “Lake Bakken”:  native son Earl Bakken, inventor of the pacemaker, and founder of Medtronic.  Namesake of the Bakken Science Museum (his former home) off the lake’s southwest corner.  In synch with one of the state’s current biggest industries, medical technology.

3. “Lake Wobegone”:  perhaps an even more-fitting homage to Keillor.

1. “Loon Lake”:  for one of the lake’s favorite wildlife residents.

Maybe U.S. Bank or TCF, namesakes for the Vikings and Gopher (college) football stadiums, respectively, would be interested (and be willing to pop for it; my suggested price:  $100 million).

P.S.:  If the photo at the top of this post looks familiar, it should:  this blog’s masthead also features a shot of Lake Calhoun.