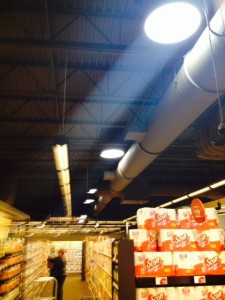 If you want to see the latest housing trends — at least in the Twin Cities — you check out new residential construction in Edina above $3 million or so.

That’s because homes at that price point are typically loaded with all the latest bells & whistles (such homes frequently host Edina Realty’s weekly Exceptional Properties meetings).

So, where do you go to check out the latest food retailing trends?

Like the new Byerly’s on France Ave. in Edina.

The net effect is sort of a mashup of Whole Foods + Costco.

But what was most eye-catching to me, quite literally, were the dozens of solar tubes in the ceiling (photo above).

They’re so bright, they initially appear to be flood lights.

Only after a second do you realize that it’s zero energy cost, passive lighting.

Looks like Whole Foods (down the street) just got some real competition!

P.S.:  The other tube — running just under the solar tubes — is the exposed ductwork.