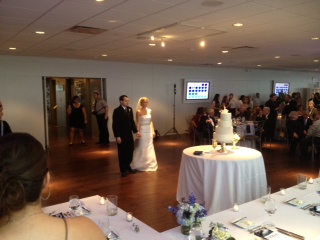 90 Miles from Pawnee, Indiana
(Just Not Sure Which Direction*)

OK, so I was only invited to one of the weddings.

But, when you’re in formal attire, 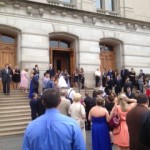 you can temporarily mill around, ala “Wedding Crashers,” at any other wedding.

So, walking from my hotel to the Lowenstein-Rudy wedding at Indianapolis’ Chase Tower Sunday (top photo), I stumbled across not one but two other in-progress weddings.

The first (above left) was just emerging from the Indiana state capitol, where the ceremony had been held in the rotunda; the other consisted of a wedding party (below) shooting photos in front of the City’s Monument Circle (kind of a combined, Columbus Circle and Statue of Liberty). 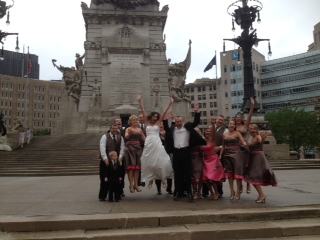 *“Pawnee” is the fictional Indiana town where sitcom “Parks & Recreation” is set.

Its location is given as “90 miles from Indianapolis.”