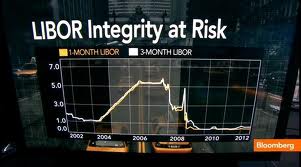 Q&A for Borrowers (“No, You Don’t Have to Return the Money”)

For those tuning out the news over the July 4th holiday, one of the lead financial stories the past few days is alleged manipulation of Libor, or the “London Inter-bank Offer Rate,” by bankers at U.K. giant Barclays.

While the allegations and defenses are still sketchy, the gist of the story appears to be that Barclays operatives conspired to artificially lower the rate, possibly with the encouragement of The Bank of England.

Barclays’ motive would have been to make (even more) money (what’d ya expect??); The Bank of England’s goal would have been to damp down speculation that U.K. banks were in even worse shape than believed at the height of the financial crisis in 2008 (the lower Libor, the stronger U.K. banks appeared, and vice versa).

Which leads to a raft of questions for mortgage borrowers.

In order of significance:

Q:  Who is affected by Libor — and any manipulation of same?

A:  In theory, ten of millions of adjustable rate borrowers worldwide, whose interest rates were pegged to Libor plus some increment.

That includes millions of adjustable rate mortgagors in the U.S., whose interest rates were — are — commonly pegged to “Libor plus 2.5%” or “Libor plus 3%.”

In practice, however, minute changes in Libor would have had the biggest effect on currency traders, derivatives speculators and others making gazillon dollar, short-term bets with one another (et tu, J.P Morgan?).

Q:  What effect did manipulating Libor have on mortgage borrowers?

A:  For adjustable rate borrowers, the effect would have been to artificially lower their borrowing costs.

But only by a small amount, and then only if the loan was originated or re-set — usually an annual occurrence — while Libor was understated.

Currently, it’s unclear how much Libor was understated, and for how long.

Q:  If mortgage borrowers benefited from such rate fixing, who lost?

A:  Lenders (technically, “mortgagees”), who received too little interest.

While the shortfall per borrower may be tiny, multiplied by tens of millions of loans, it could add up to real money (“damages”).

To the extent Barclays doesn’t have the money to compensate injured parties, expect U.K. taxpayers to have to cover the shortfall (see next).

Q:  What likely recourse do the mortgagee banks have?

A:  They could sue Barclays — and probably will.  But for many reasons — politics, logistics, uphill legal battle, etc. — they’re unlikely to pursue individual borrowers, who had no reason to believe they were receiving a windfall.