It only took 45 years, but there’s finally a closing scene worthy of the unforgettable classic at the end of The Graduate. 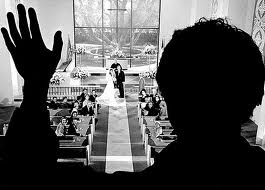 If you aren’t familiar with The Graduate’s climactic scene, a desperate Benjamin (Dustin Hoffman) interrupts the wedding of his true love, Elaine (Katherine Ross), yelling her name from the Church balcony and furiously banging on the partition glass.

Elaine hesitates . . . then bolts for the exit (and Hoffman just beyond).

A blissful Benjamin and Elaine then ride off into the sunset sitting in the back of a city bus.

Which brings us up to the season #2 finale of Louis CK, “New Jersey/Airport” (spoiler alert:  stop reading here if you don’t want to know the ending).

Louis drives his unrequited crush, Pamela, to the airport, where she tells him in the parking lot that she’s moving to Paris to be with her ex and their son.

Notwithstanding his pleading, she tells him that he “needs to get over her and move on.”

Except that Louis can’t.

is about to disappear up the escalator (photo below), she turns around to wave to a despondent Louis, who’s out of earshot and doesn’t understand her gesturing.

Hearing what he wants to hear, Louis walks out of the airport and — wearing the same smiling, self-contented expression as Dustin Hoffman on the bus — says to himself, “I will . . .”