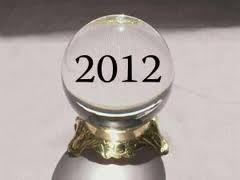 Better to keep your mouth shut, and let people think you’re an idiot, then open it and remove all doubt.

In lieu of serving up 2012 predictions, enjoy Barry Ritholtz’s similar sentiments on the subject, my favorite post of the year (so far).

In fact, I do have one prediction for 2012 — actually, more of an observation.

Much has been made of the relatively low PE (price earnings) ratio prevailing in today’s stock market.

No, I’m not suggesting that investors put their money in their mattresses (or gold, for that matter).

I’m just pointing out that — at least historically — the converse of paying up for the chance of outsized returns was discounting for perceived (and actual) risk.

If 2012 delivers (even) more of the volatility we witnessed in 2011, look for investors to demand a bigger discount for entrusting their hard-earned savings to the vagaries of the stock market.

Which, of course, means that stocks’ price earnings multiple — now a historically conservative 11  — could very well be under further pressure in 2012.

Ceteris paribus — Latin for “everything else held equal” (a favorite of economists, by the way) — that would result in lower markets the coming year.

P.S.:  Company managements who want to override such headwinds and entice investors to buy (hold?) their shares have two options:  1) hike dividends; and 2) use their free cash flow to buy back shares.