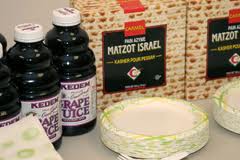 If you’ve ever been curious about traditional Jewish food like borscht (beet soup), matzo (unleavened bread), or gefilte fish (fish meatballs), now is the time to stock up:  with Passover ending tonight, all those foods and more are on sale at local Twin Cities grocery stores.

I actually think they’re better (a little) stale than fresh; as they get closer to their expiration date they become firmer rather than fluffier.

P.S.:  I suspect that for the majority of not-so-observant Jews such as myself, the end of Passover doesn’t mean resuming eating bread, cake and other foods that you’re supposed to forsake during the 8 day holiday — because we never really stopped.

Rather, it means you can resume eating those foods without feeling guilty about it.