Beginning about six weeks ago, the windows in my Master Bedroom and Bath began to collect major condensation — to the point where they literally needed to be toweled off daily, lest the wood frames start to rot.

The (4 year-old) windows have gone through three previous Minnesota winters, so I ruled out bad seals or some 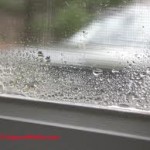 other manufacturing defect simultaneously afflicting all five windows (plus, none of the 8 other windows we bought from Scherer were having problems).

Except that when I tested it — by holding a piece of paper up to it, and seeing if it got sucked up — it was.

Theory #3, at least, was finally getting warmer — or make that colder:  what’s different about this winter that might account for the moisture?

Chris Judd, my salesman at Scherer Bros., came out to the house yesterday morning to help me investigate, and almost immediately identified the likely culprit.

After determining the (very) high moisture reading in the bedroom, we went outside, where Chris pointed to the snow that appeared to be covering the roof vent above the bathroom.

Next step:  calling the ice dam removal guys, to get the vent uncovered.