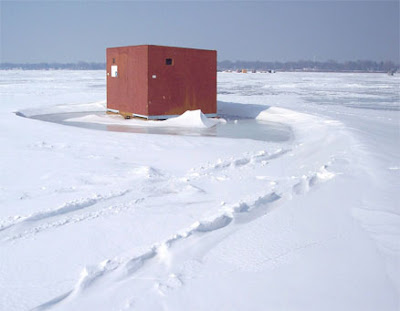 [Editor’s Note: sort of like the blog equivalent of a broken clock, this post is timely twice a year in Minnesota. The last time I ran it was mid-December]

Walking around Lake Calhoun just before dusk last night, I spotted what appeared to be not one but two ice fishing houses (no, this isn’t a picture of one of them — it’s a stock photo).

I doubt it’s been cold long enough to even stand on the ice, let alone put a structure on it.

Just trying to be first, I guess (as in plucked from the water — if they’re lucky).