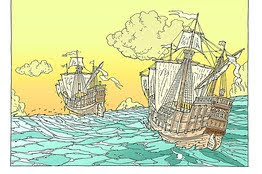 “Shame on You, Wall Street Journal!”

Long-time stock market watchers are familiar with “The Magazine Cover Indicator”: when Business Week (or Fortune, or Forbes, or Newsweek) runs a cover with the title, “The Death of Equities,” or some such — stop what you’re doing, call your broker (does anyone still have one??) . . . and buy!

Because such magazine covers, when they appear, are as sure-fire a (contrarian) indicator as they come.

In that vein, it seems increasingly apparent that an investing product such as exchange-traded funds have truly come of age — and pose a real threat to Wall Street — when The Wall Street Journal deigns to attack it directly (or more commonly, undermine it indirectly):

The world of exchange-traded funds looks like an ocean of liquidity: billions of shares trading all day long on easily accessible exchanges.

But beneath the surface is a treacherous landscape of potential trading problems that can raise costs for individual investors.

The ease of buying and selling ETFs, which typically resemble index-tracking mutual funds but trade like stocks, has helped make them the darlings of investors big and small. But as ETFs delve into more esoteric areas of the market such as high-yield bonds and commodity futures, trading them has become more complex.

Also contributing to problems with liquidity”or the ease with which these products can be bought and sold without big trading costs”are things like regulatory scrutiny, strong investor demand for certain ETFs and the fact that many of these funds now launch with the bare minimum level of assets”often just $2.5 million or so.

There are “a lot of dissatisfied customers” discovering snags in ETF trading, says a Morningstar analyst.

Sounds scary until you realize that the “risks” The Journal cites are associated exclusively with tiny, narrowly-focused ETF’s: precisely the kind that indexing investors avoid in the first place.

Rather, the entire reason to index –increasingly via ETF’s — is to get (passive) exposure to the broad market, at minimum cost and tax exposure.

As a result, the lion’s share of the now-$800 billion committed to ETF’s is held in mega-funds tracking the S&P 500, MSCI EAFE (Europe and Asia), and other very broad, very liquid vehicles.

And nobody no knows that better than The Wall Street Journal.

P.S.: Get the imagery of the sailing ships heading over the edge of the cliff? Subtle.
0Shares