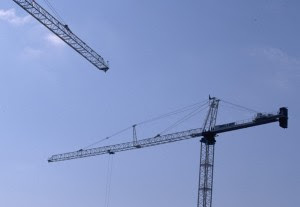 What a difference 2 years makes.

That, despite the fact by February, 2008, real estate was very much on the downside of its record run, and the nation was already in recession (not that it really matters, but the official start date was retroactively determined by the National Bureau of Economic Research to be December, ’07).

Now, the only in-progress construction I noted locally was road construction (your tax dollars at work!); a handful of cranes on the south side of downtown Phoenix; and a huge, new hotel going up on an Indian Reservation near Scottsdale (you’d think the term would be banned as not sufficiently PC, but that doesn’t appear to be the case here).

The explanation for those cranes, then and now, is why real estate — especially commercial — is inherently cyclical: big, commercial projects take years to come to fruition.

Once developers break ground, the only way to recoup their investment is to “see it through,” and finish the project.

In good times, this leads to overdevelopment.

In lean times, it means too few projects are conceived, assuring that commercial real estate supply will initially lag demand when things eventually rebound — and setting the stage for the next boom (and overshoot).