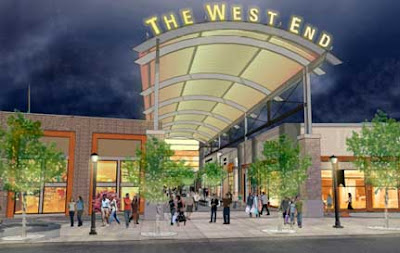 As the West End in St. Louis Park nears completion, the grand openings of various tenants are proceeding on a staggered schedule.

The development, formally called “The Shops at West End,” is being marketed as a “lifestyle center” — think, one-stop shopping — and is located just southwest of 394 and 100 in St. Louis Park.

While the planned hotel and office buildings are nowhere in sight — casualties of the recession for now — the street-level retail appears to be in place and attracting good business.

In particular, I’m already a fan of the Rainbow: easily the nicest in the Twin Cities, as far as I can tell (and much bigger than you’d expect looking at it from the street).

I can’t speak to whether the development or the concept are going to be long run winners, but as a consumer and area resident, I’m happy for the added choices. The complex is also infinitely better than what existed on the site before: a hodgepodge “dead zone” of dated industrial buildings, a mothballed health club, and parking lots.

The fact that the project has a deep pocket co-developer, Duke, and powered ahead through what could only be called a “challenging” last 2 years for commercial development are other good omens.

Long-time area residents — I qualify — will recall that once upon a time (like 1960) the parcel was slated to be the site of Candlestick Park. Of course, the Giants left New York for San Francisco, and Candlestick Park was instead built on a windswept outcropping south of that city.

A few years later, the Twin Cities got the Washington Senators, and Metropolitan Stadium was built in an obscure suburb named “Bloomington” (now home to Mall of America; next time you go, look for the bronzed home plate in the exact location it occupied while the stadium was standing).