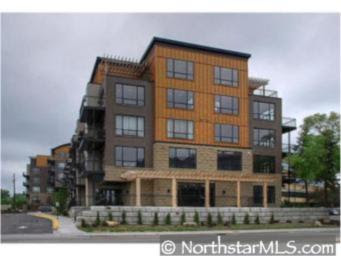 Shadow Inventory . . . in the Same Building

There’s been much talk of “shadow inventory” that wanna-be Sellers are poised to put on the market once conditions strengthen.

We’re about to find out, because there are increasing signs that the lower end of the market is stabilizing, if not rising.

In the meantime, the Loop Calhoun, a 124 unit condo-and-townhome development just northwest of Minneapolis’ Lake Calhoun, is making what might be called a market “re-debut.”

Tied up in bankruptcy the last 18 months or so, the owner, M&I Bank, is rolling out the first batch of ten units for sale.

I just took some clients through, and was very impressed: solid building, nice design, high end finishes, etc. And that’s on top of a great location.

I was also surprised by the state of completion. I’d heard varying stories about work being stopped abruptly, but the three units I toured (one townhouse and 2 condo’s) were easily more than 95% complete.

The two wild cards — and they’re big ones — are: 1) the soft condo market, especially in the upper price brackets; and 2) the overhang of supply elsewhere in the building.

In that vein . . . once the first 10 units are under contract, another 55 will ultimately be made available for sale. (The balance were purchased pre-bankruptcy.

To surmount it, developers (and banks who take title in bankruptcy) typically dangle lots of carrots (read: attractive pricing) to entice the first wave of Buyers and generate sales momentum.

Once supply shrinks, the pricing on subsequent units firms up and the incentives go away.

Will that happen at Calhoun Loop?