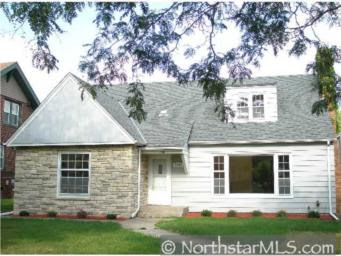 Sorry for the Dr. Seuss-inspired headline (guess who’s got little kids they read to?).

My point was, enough time has now elapsed since this Spring’s flurry of deeply discounted foreclosure sales that several are now re-appearing on the market as for-sale rehab’s. And selling — quickly.

A good example is this Cape Cod-style home in Minneapolis’ Powderhorn Park.

It came on the market in early April for a ridiculously low $88,900, and immediately attracted more than 15 offers (my client’s was one of them).

The Buyer, apparently a real estate agent (at least, the same agent represented the Buyer and now-Seller) put new roofs on the house and garage, refinished the hardwood floors, and cleaned up the Kitchen.

Did she get it?

Yup, and then some: it just closed for $213,000, which it fetched almost immediately after coming back on the market in July.

I think it’s good for the housing market that foreclosures are being absorbed, fixed up, and re-sold.

And it might even be good for the Buyer’s Buyer, who got a nice, cleaned-up house (having been through with my client twice, I can attest to its quality).

All the taxpayers — us — who effectively ate the loss on the defaulted mortgage, and never saw the upside on the re-sale.

Add nine zeroes, and that’s what just happened with taxpayers and their multiple bailouts of Wall Street investment banks.