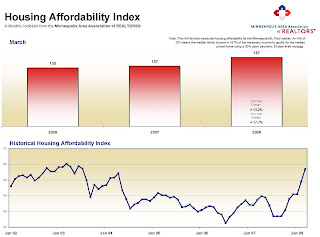 The [Housing Affordability Index] as presently constructed is utterly worthless. It provides little or no insight into how affordable US Housing actually is. Further, what is omitted from the index is especially relevant to the problems occurring in the housing market today. The Index fails to account for — or even recognize — any of the out of the ordinary circumstances that are currently bedeviling the Housing market.

If you don’t read Barry Ritholtz’s blog, The Big Picture, you should: his unvarnished take on finance and the economy is consistently superb.

That said, his relentless criticism of Realtors, and, in particular, their trade association, the National Association of Realtors (“NAR”), should be taken with a grain of salt — just as NAR’s pronouncements should be.

One.  NAR is a trade organization. Like the Investment Company Institute (stocks) or the National Association of Real Estate Investment Trusts (real estate), it can reliably be counted on to put the best possible face on whatever’s happening at the moment. That’s what trade associations do.

While I certainly wouldn’t decide to buy or sell stocks based on the latest ICI press release, neither would I dismiss everything they say as unadulterated lies and spin. Ditto for NAR and housing.

Two.  Most Realtors — myself included — don’t sell real estate nationally, they sell locally. I focus exclusively on the Twin Cities market. So the HAI chart at the top of this post, and my discussion of HAI statistics generally, pertain primarily to the Twin Cities.

To come up with a single gauge of relative housing prices, it takes three key variables — interest rates, median family income, and median housing prices — and puts them in a blender. The resulting number offers a relative measure of housing’s affordability nationally (NAR actually puts out four regional calculations, but it is the national one that receives the most attention).

Locally, that’s exactly what you find. After plateauing in 2003, the Twin Cities HAI deteriorated steadily until the third quarter of 2006. The chart’s next installment, showing the change from January, 2008 through January, 2009, will show it skyrocketing (to over 192).

So what are Ritholtz’s principal beefs?

One. The HAI remained well north of 100 — its baseline measure of housing affordability — throughout the period when the housing bubble was inflating, up to and including the peak (completely true, by the way).

Rebuttal: the HAI should be viewed as a relative measure of affordability.

Historically, however, lower P/E’s correlate with better value, higher with less. Ditto with the HAI and housing.

Rebuttal: Wrong. Those factors are captured by two of the HAI’s three inputs — housing prices and interest rates.

Housing prices clearly are dropping now for all the reasons Ritholtz mentions (fewer Buyers have 20% downpayments, their credit scores are deteriorating, etc.). That feeds directly into the HAI’s (shrinking) denominator.Meanwhile, recessions crimp demand for money, which results in lower interest rates. That, too, is captured by the HAI (its numerator increases). The HAI may be a gross benchmark, but its very consistency means that it can be compared across time intervals.Three. Regional variations in home prices and income are ignored.

Rebuttal: Wrong. The HAI is computed nationally, but also by region (Northeast, Midwest, South, and West). Even after huge price drops, the HAI in the West is quite low: 108.4. Meanwhile, it’s setting records in the Midwest: 186.0 (both numbers as of November, 2008).For Ritholtz to say that the national HAI ignores regional variations is like saying the Wilshire 5,000 obscures the fact that some market sectors (energy, consumer durables) have outperformed others (tech, small cap stocks). Undeniably true — and meaningless.

There’s no denying that Mr. Ritholtz’s skepticism towards NAR is historically warranted. However, trashing a useful tool such as HAI — without regard to context or application — is effectively throwing the housing baby out with the bathwater.