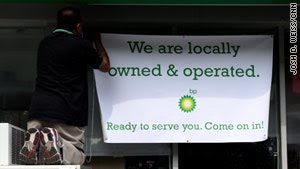 I guess if I owned a BP gas station, I’d do the same thing: buy a big banner reading “Locally Owned,” and display it — prominently — in front of my gas station.

Which is exactly what I saw in front of the BP station on Excelsior Blvd. in St. Louis Park the other day.

Reminds me a bit of what post-Watergate Republicans did in Minnesota to distance themselves from Nixon: changed their name to “Independent-Republicans.”

I think that lasted for about a decade, until Ronald Reagan made it OK just to be a “regular” Republican again . . .