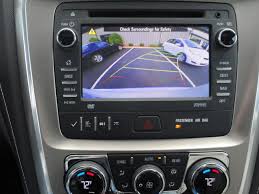 The Warning Detector That Didn’t Beep

How do you know that a new technology is a “keeper?”

When it’s conspicuous by its absence.

Exhibit A:  the warning detector that beeps in my car — but not my wife’s — as the driver backs up.

Which explains how, driving her car and backing into a parking space the other week, I bumped into the car behind me (at 2 miles an hour, thankfully there was no damage).

Along with new technology comes the need for new language to describe that technology (and the experience of using it).

In that tradition, I propose a new word to describe the confusion and disorientation one momentarily experiences when a technology or app one has successfully integrated into their routine is suddenly . . . missing.

I experienced that sensation not once but twice last week, both times driving a (cheap) rental car on vacation.

The first time I was backing up in a parking lot, and looked at the dashboard to see if I was close to hitting something.

Ditto for the beeping I’m used to hearing in my other car as I back up and approach another object.

Barely a few minutes later, I was at a red light, and noticed the car rolling forward when I thought I was in park.

Nope, that’s something my (fancy) car back home does, thanks to a setting that automatically puts the car in “Park” when the car is idling (it seamlessly shifts back to drive when you hit the accelerator).

However, at least for now, if you take your foot off the brake in a regular car . . . you roll forward (Duh!).

The irony, of course, is that mostly we adopt — and adapt to — new technology without ever looking back.

Does anyone today view email as a novelty?

On the contrary, being unplugged and offline is the anomaly now.

But, if you want to see where things are going, one of the best ways is to (briefly) look backwards (literally and figuratively).

P.S.:  If you’re old enough (I am), you can remember when car radios and a/c were options (vs. standard equipment) — never mind backup cameras and GPS.

Following the Democrats’ sabotaging of his nomination (in 1987!), Bork’s name became a shorthand for torpedoing a high profile nomination.

Maybe in another 10 years.

–Getting grokked:  “Grok” Arthur C. Clarke’s term for “getting something on profound level.”

**”Grok”:  from Robert Heinlein’s “Stranger in a Strange Land.”

Ross Kaplan has 19+ years experience selling real estate all over the Twin Cities. He is also a 12-time consecutive "Super Real Estate Agent," as determined by Mpls. - St. Paul Magazine and Twin Cities Business Magazine. Prior to becoming a Realtor, Ross was an attorney (corporate law), CPA, and entrepreneur. He holds an economics degree from Stanford.
Prev